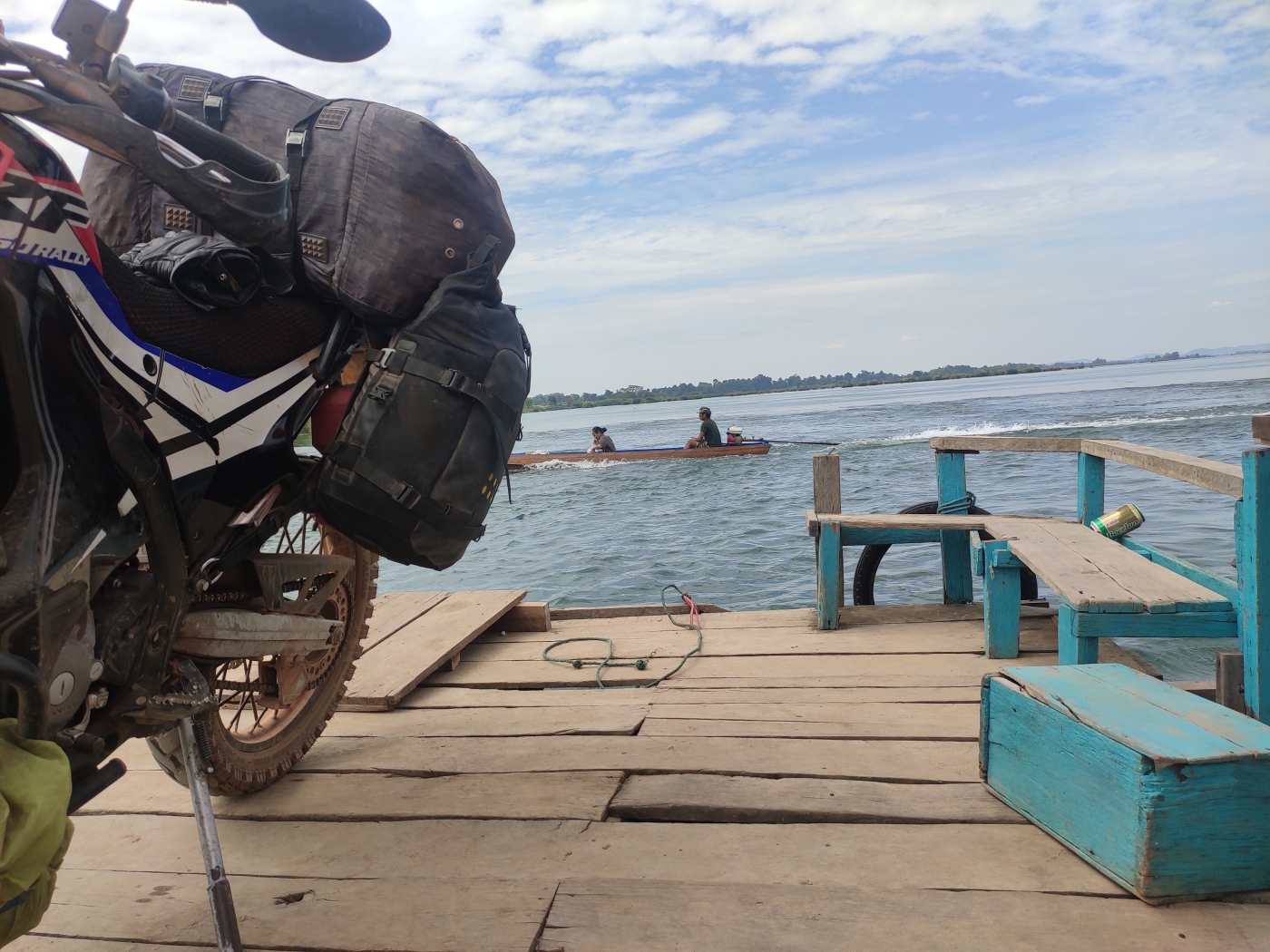 Laos blew me away with its amazing mountains, pretty waterfalls and most of all it’s relatively untouched by the western influence once you go outside of the tourist attractions.

I arrived from Cambodia, to me there was an instance difference. The landscape was much more green and the trees had returned!

First stop was the 4000 islands! A section of small islands within the Mekong rivers hold. I stayed at Don Det and to get there took a small boat for about $10.

Arriving at the island after thankfully managing to stay afloat there was a section of wooden planks lay out to climb up the beach which was easier than it looked to get on and climb up from the boat.

I hadn’t booked anything but knew that there was accommodation around the outside so I road around the island till I arrived at my own small cabin next to the river. Initially the bridges were intimidating to go over since they looked like they had simply found some planks of various condition ranging from ok to “hmm I’m not so sure about that one”.

The “road” around the island was sandy in places and for the most part only wide enough for two motorcycles to pass each other.

If you stay on Don Det I highly recommend taking a boat trip (simply ask most hostel owners)to go and see the sunset from your own private beach.

I stayed a few days and on the last day I was told to go and see a coffee farm up on the Bolaven plateau. The coffee farm I went to was called Mystic Mountain Coffee, I stayed for two nights and learnt plenty more about coffee. It was great to see how the beans are grown and roasted and the taste was amazing.

The road to and from mystic mountain coffee wasn’t one you would ride with your eyes shut! There was a thick layer of fine dust around 6 inches and deeper that hid the rocks underneath which made for a challenging ride in places.

After returning back to the main road I headed to Pakse to look for a coffee grinder for my newly acquired coffee beans but to no luck! I spent the next few days riding up to Vientiane to sort out my plans for going to Vietnam after Laos.

After finding out where I could possibly leave my bike to go into Vietnam and the logics of acquiring certain paperwork I started to head north.

I was heading north up to Hauy Xai in the far north west Laos to meet a friend so we could explore more rural areas of the north together. With this in mind I didn’t take much time to truly explore which in hindsight I wish I had.

Vang Vieng was the first stop from Vientiane and just outside of the city was where I saw my first sights of the beautiful mountains. These mountains are made out of limestone and I found them amazing to look at. After the flats of Cambodia these were the first set of amazing mountains I had seen and I had really missed amazing landscapes like this.

I stayed in Vang Vieng for a couple of nights, it is a very touristic place and does have nightlife but there are caves, hikes and blue lagoons to go and see. You could even float down the river in a rubber ring with a drink if that’s your thing. I would be tempted to take a flask of coffee and sip away watching the world as I float past but not having much time I was soon back on the bike heading north.

This stretch of road between Vang Vieng and Luang Probang was some of the nicest sceneries I’ve had the pleasure of riding through. Twisties and a climb to the top of a mountain pass with a view was what this day had in store. There was even a dust tornado!

Luang Probang is well known and again touristic due to the waterfalls it has dotted around it. The one I went to was called Kuang Si and was pretty amazing. The calcium deposits make the waterfall look like its melting as the water flow over the top of it. I really wish I has spent more time here and came early morning so the sun was in a good position and less tourists so I could get a great photo. I didn’t take that opportunity as I knew I would be coming back this was and thought I would get that awesome photo to remember it then but sadly it didn’t happen!

From Laung Prabang to Huay Xai I road about 10 hours of really twisty mountain roads to meet my friend. Unfortunately only on our second day they had an accident and the ride had to be put on hold. It certainly wasn’t a nice experience watching them look up at you in surprise from under the bike. Thankfully they had only fractured there ankle and it was nothing more serious but of course at the time we didn’t know what the damage was.

After waving a car down for some help to pick up the bike and move it out of the road my attention turned to how we would proceed. We decided to play it safe and make the 37km journey back to where we has started that morning. There were a number of hospitals there and hopefully they would be able to help.

After around 20 minutes of trying to get cars to stop and take my friend to the city where the hospital was we gave up and made the choice that they would get on the back of my bike. It was unbelievable that no one helped us, 95% of cars wouldn’t stop and the other 5% drove off after explaining what we needed. I certainly was glad that it was nothing too serious and that we weren’t riding alone.

After arriving at the hospital it only took and hour before we were walking and hoping out the door again. The X ray showed nothing in their opinion so we went back to the place we stayed in the morning and arranged to stay there. We then paid for them to take me to my friends bike so I could collect and bring it back. The bike it’s self only had a damaged hand guard and sustained very little damage. The luggage bags took most of the force and with only a small hole it was certainly not as bad as it could be.

The cause of the accident was never found. The road was in bad condition,the tyres were nearly new and there was a small amount of chain lube of the edge of the tyre but no one cause could be identified.

My friend was discomfort so we went back to the hospital for another x-ray after a few messages from back home the doctors there had said it could still be broken. Like the day before we paid $7.5 for an xray and were told to go home there’s no problem.

We bought some crutches and decided to stay a few more days and let it heal to see if we could get back on the road. We both wanted to get back into Thailand since the borders were getting harder to get into due to Thai laws.

The 5 day ride south wasn’t at a relaxed pace and no sight seeing could be really done due to high number of KM needing to be covered as well as the reduced mobility due to the damaged ankle.
We did however enjoy the same ride as I first described and exited into Thailand without any issues through the bridge near Vientiane. The only one notable item was I had to pay a $15 fine to Laos for not exiting at the same border as on my bike paperwork. I had no idea as it was simply a code on the paperwork and I wasn’t informed when I entered but after dodging the $200 potential fee we paid last time to get into Thailand it was not a problem at all.

Overall and it was a pleasure to see each other it was just a shame about the circumstances.

I would love to have seen more of Laos and really get off the beaten track, I think there’s much to see here! One of the lesson learnt here was to embrace the moment when you are there, don’t think that you will have another opportunity later on.

Memoirs Of A Motorcyclist

Memoirs Of A Motorcyclist